Once a year, folks converge on Lake Hiwassee in Murphy NC for an event known as “The Big Sweep.” It’s a noble event with a single goal – to remove trash from the shore of one of Murphy’s best kept secrets.

The 2012 Lake Hiwassee Big Sweep was this past Saturday at the Hanging Dog Campground. Albeit a rainy day, especially in the morning, about 60 or so dedicated people showed up and raked in a huge pile of trash! As you can see from the picture, it’s quite a bit of trash. The stockpile included a couple dozen tires, an old refrigerator (how’d that get in the lake?!?!), LOTS of plastic bottles, glass bottles, and other general junk. There’s no telling where it all comes from, I just know there’s a whole lot less out there. And in fact, there was approximately 15,000 pounds of trash removed!

It’s a great event that’s a lot of fun! You get to spend time with friends, make new ones, get on one of the prettiest lakes you’ve ever seen, and make a positive impact. A good customer and friend, Mike Briggs, even joined us before his house hunting trip! Even he thought it was a great trip and wants to go to it next year. It’s a great cause, so we certainly would love to see you there next year! 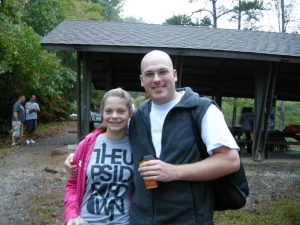 Lake Hiwassee is a gorgeous resource here in Murphy, and I find myself writing about it often in many different articles. A week ago today was the annual Big Sweep. It’s an arranged group of folks who spend at least half their Saturday on Lake Hiwassee cleaning up trash in different coves. Jessica and I did it, and I have to admit, it was a lot of fun! We even did it on our canoe, so we paddled the whole way! It was a bit more work, but I have to admit, it got us to places where larger boats would’ve had trouble and was fun.

It was organized by Silas Allen, our very own head of the Cherokee Building Department, and Susan Hersh (who I might add is the “face” of the Building Department as you always see her running the show when you go in 🙂 ) It takes ton of preparation and organization, and thanks to them, the turnout was great. There were roughly 130 volunteers, 20 boats, and an estimated 20,000 pounds of trash taken from the shores of the lake. This year’s focus was right around Bear Paw. It was such a great event – it was on the front Page of this week’s Cherokee Scout newspaper. 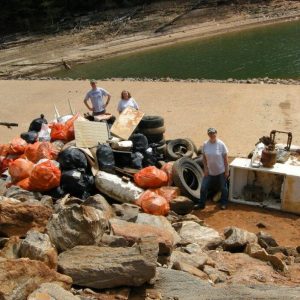 The majority of the trash come from the rivers, creeks, and streams that are tributaries to Lake Hiwassee. It’ll come from someone’s yard and eventually end up in Lake Hiwassee. We found lots of things in the lake such as tennis balls, countless plastic bottles, Skoal cans, tires, coolers, televisions, and tons more. It’s amazing how many things end up in the lake, and it was nice to know we were able to make a difference.