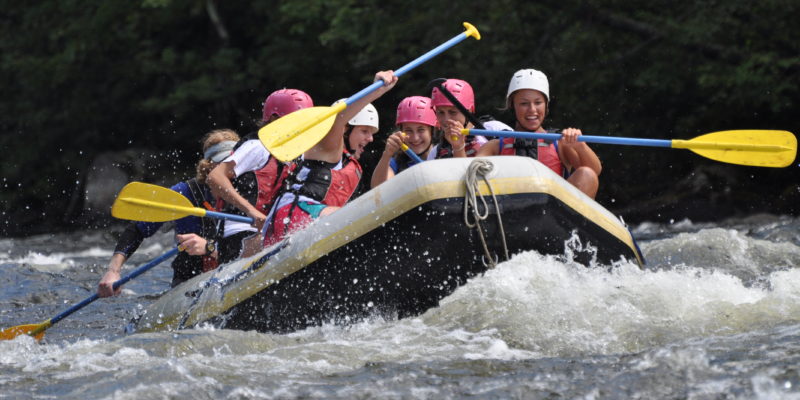 When the weather gets warmer – and especially when it’s downright hot and steamy – there are few things more enjoyable than rafting down an icy mountain river. Whether you haul your own raft to the launch site, or rent one from a nearby outfitter, you’re almost guaranteed to get wet and have a blast. If this sounds like great fun, the news gets even better: you’ll find two well-known whitewater playgrounds within easy driving distance of Murphy, NC. The mild-tempered Nantahala River is ideal for families and novices, while the Ocoee River offers higher-level challenges for real thrill seekers.

Nantahala River
To reach the Nantahala River’s navigable waters, travel a few miles past Andrews, North Carolina on Route 19/74 (also called the four-lane). You’ll begin to glimpse the river as you wind along the two-lane road to the Nantahala Gorge. You’ll also notice several rafting outfitters that run guided and non-guided trips along the river. Although Nantahala Outdoor Center is the largest operation, several other companies also deserve consideration. Please note: Outfitters’ age and weight limits may vary, so obtain this information before finalizing your reservation.

After you select your outfitter, and your guide provides an orientation, get your feet wet by running eight miles of the Nantahala River’s milder Class II rapids. When you finally reach Nantahala Falls, you’ll be ready for the churning Class III whitewater. After exiting the river at the takeout point, you’ll be tempted to swap stories over cold drinks and snacks.

Of course, intermediate-level rafters might want to rent their own boats for the day.  Depending on the outfitter, rafts accommodating two to eight people might be available. Again, confirm the rental criteria before you spring for the payment.

Ocoee River
Let’s say you’ve enjoyed several Nantahala River trips, and you’ve gradually improved your skill level. You think you’re ready to tackle the Ocoee River, near Ducktown, Tennessee just over the state line. This challenging river is chock full of Class III and Class IV whitewater, with more than 20 rapids drawing adrenaline junkies from the eastern half of the United States. In fact, the Ocoee River has hosted several national whitewater championships, and served as the home of the 1996 Olympic whitewater competitions.

Surprisingly, the Ocoee River’s legendary whitewater conditions are carefully managed by the Tennessee Valley Authority, or TVA. During the spring and fall, TVA releases water into the river on weekends, with summer releases from Thursday through Monday. When TVA isn’t feeding the whitewater paddlers’ addiction, the company uses the river water to generate power.

Now that you’ve gotten familiar with the Ocoee, decide whether to raft the river’s equally impressive Upper or Middle section first. Although outfitters’ offerings vary, a half-day, five-mile trip generally packs in numerous Class III and Class IV rapids. A less-common, full-day trip combines both sections, and ramps up the excitement by adding the 1996 Olympic whitewater slalom course to the mix. Please note: Outfitters may require age minimums, plus intermediate to advanced skill levels, for these white-knuckle trips.

Now that you’ve been bitten by the whitewater rafting bug, grab your calendar and plan a visit while the season’s in full swing. By staying in Murphy, NC, you’ll be within driving distance of both rafting hotspots, and you’ll find plenty of enticing activities throughout Cherokee County. So make those reservations now, and get ready for a photo-worthy whitewater adventure!