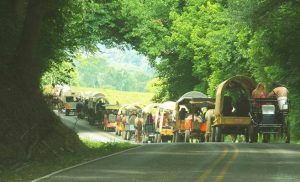 Settling your family in a new location is always an adventure. You find that perfect home in a beautiful spot, arrange for professional movers, and pack your personal effects in carefully labeled boxes. On the big day, you arrive at the new home, ready to resume your active life while getting acquainted with your community.

Original Wagon Train Travelers Faced a Challenging Journey
But what if you embarked on that move with everything you owned in your vehicle? And you rode on deeply rutted roads often mired in mud and obstructed by fallen trees? During the late 1800s, many western North Carolina families traveled this way, making the trek from Asheville to Murphy, NC or stopping at a town along the way. Some travelers ventured as far as eastern Tennessee or northern Alabama.

Hardy travelers endured these bone-jarring trips in no-frills wooden wagons with uncomfortable seats and no air conditioning. Their companions rode along on horseback, fully exposed to the often-nasty weather conditions. In other words, neither form of transportation offered much in the way of creature comforts.

The WNC Wagon Train Tells the Tales of a Bygone Era
To commemorate these historic rides, the Western North Carolina Wagon Train, one of the longest-running wagon trains in the United States, gathers each summer in Andrews, North Carolina. Founded in 1958 as the Tellico to Murphy Wagon Train, the late-June caravan first traveled across the mountains from Tellico Plains, Tennessee to Murphy, North Carolina.

Much to everyone’s surprise, the Wagon Train’s inaugural journey drew considerable interest, with 67 wagons and 325 horseback riders taking part in this historic trek. Following each day’s ride, the group gathered in a well-spaced campground along the winding route. Spectators were plentiful throughout the trip, with thousands of cheering fans welcoming the group to Murphy on the 4th of July.

For the next six years, the Tellico to Murphy Wagon Train used the same route. Building on that initial success, the group began varying its routes through the mountains, always culminating in a visit to a designated town’s Fourth of July Parade. In recent years, however, the Wagon Train has found it more difficult to secure travel routes and campground facilities. Because of these challenges, the group established an ongoing Andrews, North Carolina base camp, and enjoys a standing invitation to the town’s Fourth of July Parade.

Now called the WNC Wagon Train, Inc., the organization enjoys oversight by a board of directors from western North Carolina, eastern Tennessee, northern Georgia, and Alabama. The group has also expanded its mission to include a focus on fair treatment of horses through education, practice, and enrichment efforts.

The WNC Wagon Train Celebrates Its 60th Anniversary in 2017
The 2017 WNC Wagon Train will celebrate this storied group’s 60th Anniversary from June 29 – July 7. Bring your family to Andrews, North Carolina to meet these intrepid “travelers,” and share a fascinating slice of our region’s history. The Wagon Train’s 60th Anniversary festivities begin on June 29, also known as “Gathering Day.” Throughout that day, Wagon Train participants will congregate in Andrews at the corner of Robbinsville Road and Highway 74, in the big field visible from the highway (also called the 4-Lane).

Each morning through July 7, riders will hitch their trusty horses to the wagons, setting off to explore the sparsely traveled roads around Andrews and the Valley River valley. They’ll return to their camp every night, enjoying dinner together and likely spinning tales of the day’s ride.

On Tuesday, July 4, the Wagon Train will enjoy a Layover Day, which fortunately coincides with Andrews’ Fourth of July Parade, set to kick off at 10 a.m. Riders will decorate their horses and wagons for the big event, adding another festive touch to this patriotic celebration. Following the parade, the Wagon Train participants will host an afternoon of lively games. Events include kids’ games, horseback and ground contests, a team pulling competition, a dunking booth, and much more.

Enjoy the WNC Wagon Train’s 60th Anniversary Celebration
If you’re intrigued by the WNC Wagon Train’s 60th Anniversary festivities, and you’d like to watch this dynamic historical display unfold, claim a comfortable viewing spot along one of the group’s daily routes. Or, if you’re an experienced horseman or horsewoman, and you can handle several hours of riding on often-challenging roads, consider joining one (or more) of the group’s treks through the Valley River valley and surrounding hills. View the daily schedule below:

Now that you have the makings of a great summer outing, pile your family in the car and make the short trip from Murphy, NC to Andrews. Then, pick a good vantage point along a WNC Wagon Train route, and step back in time as you imagine our region’s settlers making the exciting journey to their new homes.